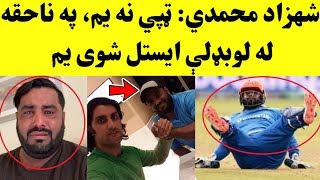 
Mohammad Shahzad Said I Am Not Injured

Shahzad, who was out of the Cricket World Cup, returned home from England on Sunday.

He was replaced by wicket-keeper batsman Ikram Ali Khil called up as a replacement.

Shahzad had retired hurt after suffering a knee injury in Afghanistan's warm-up fixture against Pakistan. While the wicket-keeper batsman featured in their opening games against Australia and Sri Lanka, the aggravated injury has ruled him out of participation in the rest of the competition.

Talking to TOLOnews on his arrival in Kabul on Sunday, Shahzad said that he had no health problem but despite that he was removed from the World Cup matches by Afghanistan Cricket Board (ACB).

“I did not take anyone’s side, therefore, I was removed from the team,” he said.

“I was not informed. I was doing my training. I have not slept for two or three nights,” he said. “I had two to three hours training and I was informed about the [ICC] decision from the news.”

He said that he had retired hurt in the warmup match against Pakistan.

“I had a previous injury on my knee and I had recovered. But during Pakistan match, I did good keeping and batting… and I sustained an injury. I told Hazratullah (Zazai) not to give single runs. He assured that he will do so. But the pain increased, and I could not continue the match,” he explained.

Shahzad said that Asghar Afghan was the best captain for the national team as he created harmony among the team members. “Asghar had the support of all the team members,” he added.

He said that it does not seem that he will return to the team.

Since the 2015 World Cup, Shahzad has been Afghanistan's second highest run-scorer in one-day internationals with 1843 runs in 55 innings. Ali Khil, his replacement, made his international debut against Ireland last year.

The replacement of a player requires the approval of the Event Technical Committee before the replacement player can be officially added to the squad.